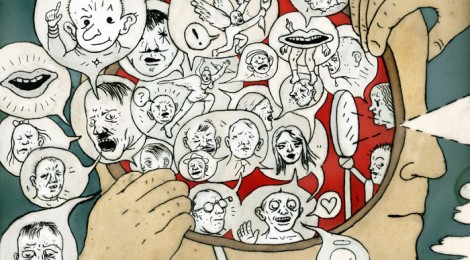 Can Some Lead a Better Life Listening to their ‘Voices’?

Hearing voices is usually considered a sure sign of mental illness, but recent studies suggest that hearing voices is more common in the general population than previously thought.   Though inconclusive, research estimates are that between 2 and 10% of people hear voices, with only 45% actually qualifying for a psychiatric diagnosis.

The notion that hearing voices can be non-pathological is still controversial.  Contemporary psychiatry views hallucinations (auditory or otherwise) as the result of abnormal brain function, representative of a more pervasive psychotic disorder.  Coming from a disordered brain, the content of voices are said to have no inherent meaning.  Treatments minimize or eliminate symptoms (usually through the use of medication) and provide coping strategies through cognitive behavioural therapy (CBT).

The ‘Hearing Voices Movement’ challenges the medical model.  Started in the early 1990s, the movement provides an alternative, non-pathological framework, claiming that hearing voices is fairly common in the general population and can exist outside of psychotic disorders.  They view voices as resulting from life events, (e.g., traumatic experiences), and that better coping comes from gaining insight into how the voices relate to unresolved trauma.

In a Dutch study published in 1989, Marius Romme, at the University of Limburg in Maastricht, and science journalist Sandra Escher found that out of 450 participants, about one third reported being able to cope well with their voices.  Of this group, people were more likely to have a positive interpretation of the voices, accepting them as part of their life instead of trying to fight or ignore them.   Although many of these participants still found some voices distressing, they were able to draw firmer boundaries and felt less powerless than the group that did not cope as well. Building on the fundamentals revealed by their research, Romme and Escher were able to translate their findings into a therapeutic approach.  Known as the Maastricht approach, the aim is to foster curiosity about the content of the voices in order to gain insight, resolve underlying emotional problems due to past traumas, and eventually accept the voices as a part of the client’s life and self.

Voices can be positive, negative or banal –many voice hearers have some combination of the three.   In treatment, the client is asked to set aside a time to listen to the voices nonjudgmentally, as if they were talking to an actual person.  Along with the therapist, they try to unravel when the voices began and why.

In contrast, treatments like cognitive behavioural therapy (CBT) and similar methods aim to reduce the frequency, intensity and believability of hallucinations.  People receiving this type of therapy are encouraged to directly challenge the content of the voices, and cope by focusing on other things in their environment and use distraction to redirect their attention.

But when techniques like distraction and redirecting attention are used incorrectly, they result in people suppressing and fighting their symptoms, rather than learning to live with them.

Several studies show that individuals who try to suppress thoughts and hallucinations may increase their frequency and intensity, and exacerbate distress   (described in the work of Social Psychologist, Daniel Wegner of Trinity College).  Alternatively, the Maastricht approach encourages the client  to eventually accept their voices without challenging their content or trying to fight them.

Some claim success for this kind of acceptance-based treatment, even in cases of psychosis.  In a study by clinical psychologists, Patricia Bach and Steven Hayes at the University of Nevada, Reno, 80 inpatients with schizophrenia were assigned to either continue their treatment as usual or engage in four sessions of acceptance and commitment therapy (ACT) in addition to usual treatment. At the end, patients who attended the ACT sessions were three times less likely to be hospitalized again, and were more likely to question the voices’ control over them and evaluate the reality of the voices’ claims.  Bach and Hayes think the acceptance component allows people to be less distressed overall and view the voices as ‘just thoughts’ that don’t necessarily have meaning or power over them.

While ACT is a widely validated therapy, the Maastricht approach has less research to back up its claims.

The Maastricht approach is still considered peripheral in many circles, especially the idea of voices as an extension of human experience.   And critics of the treatment take issue with the implication that almost all auditory hallucinations are caused by traumatic experiences, overlooking or down-playing evidence regarding genetic and biological influences.  While it is true that many people who hear voices have experienced traumas in their lifetime, there is little evidence that trauma alone can directly cause auditory hallucinations.

And, some claim the Hearing Voices Movement ignores the needs of people with severe mental illnesses such as schizophrenia, which involves a host of other symptoms in addition to hearing voices.  Using the ‘hearing voices therapy’ only addresses one aspect of a multifaceted syndrome and may be harmful if the other symptoms worsen.

Still, when we look at the idea of hearing voices in a way that is not exclusively pathology-based, we open new possibilities, and we engage in what psychologist Andrew Moskowitz (University of Aarhus, Denmark) claims to be a necessary paradigm shift.  Indeed, it may be time for one.