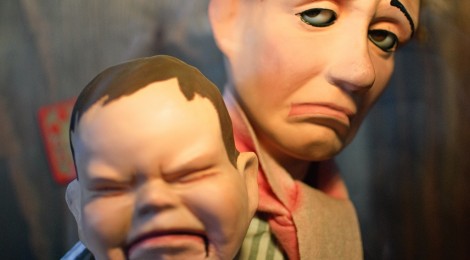 After his son Jaden was born, Jason Maharaj felt depressed, exhausted, and stressed. Following complications during the pregnancy, Jason’s wife was diagnosed with postpartum depression, and he had to look after both his son and his wife while continuing to work.

But Jason soon realized that his mood was unusual and he spoke to a clinician about his feelings. The clinician responded: “Now is not the time for you. Now is the time to take care of your wife.” Only after he reached his tipping point—snapping at his son and bursting into tears—did Jason receive a diagnosis of his own.

Postpartum depression is most commonly diagnosed in new mothers within 12 months of childbirth. However, 1 in 4 new fathers also experience symptoms of the disorder during this period.

The symptoms include depressed mood, little interest in regular activities, feelings of worthlessness, and loss of energy.

Fearing that an open discussion of their feelings would result in dismissal or stigmatization, many men experience symptoms but resist seeking help. In a study conducted by Jane Iles, Pauline Slade, and Helen Spiby at the University of Sheffield in the UK, couples completed questionnaires about their stress levels at different times following childbirth—after 7 days, 6 weeks, and 3 months. Results showed that symptoms of postpartum depression were similar among men and women. Men’s acute symptoms often followed their partner’s or occurred simultaneously. In both men and women, higher levels of postpartum depression and posttraumatic stress were related to inadequate partner support.

Sherri Melrose, assistant professor at the Centre for Nursing and Health Studies at Alberta’s Athabasca University, believes that healthcare professionals could help families best by addressing the needs of both parents. She explains that men often respond to their depression by socially isolating themselves or by expressing aggressive and pessimistic mood patterns.

Jason Maharaj showed frustration toward his son, who was craving attention. “I jumped up and turned around and yelled at him,” he recalls.

Unlike many women who are more comfortable expressing sadness, men often react to their depression with anxiety and anger. Melrose notes that some men may turn to substance abuse, avoidance of familial responsibilities, or extra-marital affairs to cope.

But like women suffering with postpartum depression, a father’s reaction to the disorder depends heavily on the social support they receive, especially from partners. In the same study by Iles, Slade, and Spiby, the authors found that men who feel attached to their partners and receive support are less likely to withdraw, react violently, or cheat. Melrose recommends that healthcare practitioners be taught to recognize not only the existence of postpartum depression in men as well as women, but also the different ways it can manifest.

Commonly, women are administered the 10-question Edinburgh Postnatal Depression Scale to determine signs of postpartum depression. But Melrose questions the validity of this scale for use with men, as it cites frequent crying as a major symptom, which is far less common in men.

The more recent Gotland Scale for Assessing Male Depression uses 10 questions specifically designed to assess masculine expression of depression, using phrases such as “stressed out” or “burned out” rather than “I have been so unhappy that I have been crying.” Melrose believes the Gotland Male Depression Scale may be more suitable to test postpartum depression in new fathers, but suggests further testing to confirm the scale’s reliability and validity.

Because postpartum depression in men is highly stigmatized, hospitals, outpatient clinics, daycares and other organizations serving parents and children should consider their role in educating new parents about its possible manifestation in men. Psychologists and physicians should also ensure they take the feelings of both parents seriously.

Until they do, it is unlikely the stigma surrounding the condition will dissipate.