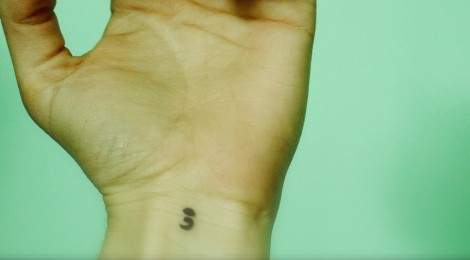 Sure, writers dismiss it. But the semicolon –the otherwise underwhelming punctuation mark– has had its share of fans. Like American physician and poet Lewis Thomas, who said the semicolon leaves “a pleasant little feeling of expectancy; there is more to come; read on; it will get clearer.”

Amy Bleuel echoed this sentiment when she founded Project Semicolon on April 16, 2013. This global non-profit movement is dedicated to providing support for those struggling with mental illness, suicide, addiction, and self-injury.

In a recent interview with the Trauma and Mental Health Report, Amy shared the meaning behind the semicolon:

“It represents continuance. Authors usually use the semicolon when they choose not to end the sentence. You are the author and the sentence is your life, and you’re choosing to continue.”

“I’m kind of continuing his story by telling it to raise awareness. It took 10 years for me to do it but I was able to use his story to bring hope to others and that was my inspiration.”

Since the project’s humble beginnings, the semicolon has evolved into something much bigger. After one of Amy’s blog posts went viral, many decided to get inked with the symbol. What’s more: they started sharing their stories online and creating awareness around mental illness. But according to Amy, Project Semicolon was not intended to become a tattoo phenomenon:

“It was not meant at all to be a tattoo campaign. It was just picked up as that. I got a tattoo. People started getting a tattoo. It became something people apparently wanted to say.”

It also became something people were willing to stand behind. As a registered charity, Project Semicolon raises funds to help fight stigma and present hope and love to those in need. Dusk Till Dawn Ink, a tattoo shop in Calgary, even donates a portion of the proceeds from semicolon tattoos to the Canadian Mental Health Association.

But the semicolon isn’t the only mental health tattoo out there. Casidhe Gardiner, 20, has an eating disorder recovery symbol tattooed on the inside of her arm, alongside the words “take care.” To her, the tattoo serves as a reminder to look after herself and to avoid relapse:

“If I branded myself with a recovery symbol in a place that I could see all the time, it would remind me in a hard time when I’m spiraling down again that I’ve recovered. I’ve done all this hard work to get there. Why go through the negative parts of the disorder when I have all these amazing parts of recovery?” What is it about mental health tattoos that help in the healing process?

According to Casidhe, the tattoo works as a conversation piece—sparking discussion when it might not happen otherwise. When asked about the role the semicolon tattoo plays in her healing process, Amy felt the concept was more opaque:

“You know I’m not really sure how that works. I have a lot of people say they look at the semicolon and it gives them inspiration. It’s a reminder that says you get to keep writing. Yeah it sucks sometimes but you get to keep going and choosing how you write that story.”

Supporters of the project have declared April 16th ‘National Semicolon Day.’ On this day, everyone is invited to post their semicolon tattoo on social media platforms like Twitter and Pinterest with the hashtag #ProjectSemicolon, raising awareness and celebrating the network of people who believe in moving forward despite their challenges.

On their website, the project states that they are not a helpline, nor are they trained mental health professionals. But what makes Project Semicolon special, according to Amy, is that it emphasizes the importance of community and non-judgmental support in recovery:

“These people need somebody who cares, who understands them. Not just people who say everything will get better. I wanna be open and honest about my own struggles, I don’t want them to think I’m a person who doesn’t struggle. I want people to be able to come up and say, ‘I struggle too.’ Why do we need to hide?”

A simple punctuation mark; a tattoo; a network of support. Perhaps by wearing a symbol that represents the struggles and victories of the human spirit, the invisible becomes visible. And visibility is important when striving for universal acceptance.

“Stay strong; love endlessly; change lives.” The phrase appears on the mission statement on the project’s website. It was borne of a phrase close to Amy’s heart:

“I use the phrase “love endlessly” and I truly believe that it’s love that can save a life. And my father showed me that in the short time I had with him.”