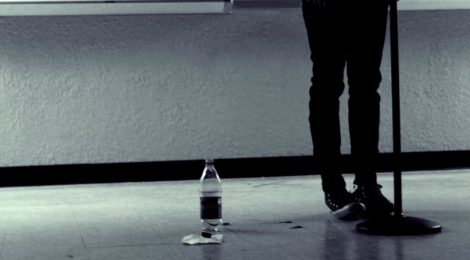 Andrea Gibson is a spoken word artist and activist who writes with intense passion about mental illness, bullying, and social tragedy.

In her award-winning poem, The Madness Vase, Gibson speaks firsthand about the shame many feel from disclosing experiences of mental illness and suicide. In an interview with the Trauma and Mental Health Report, she explained, “The trauma said don’t write this poem; no one wants to hear you cry about the grief inside your bones.”

When asked why people use spoken word to share these sensitive and personal experiences, Gibson told the Report:

“I can say things within the context of a poem that I could never speak outside of a poem. There is a way in which a poem cares for its writer. Allows no interruption. It’s a sweetness, a generous sweetness. I think of a poem almost as a good parent who might say, ‘I’m going to hold you and have your back while you say this, and you have every right to say this.’ There is a safety in it. A holding we may not have had elsewhere in life.” Gibson also speaks to the ways in which sharing poetry can build self-esteem and promote self-love in both speakers and audience members, and views her poetry as a form of therapy to treat anxiety and depression:

Gibson’s ability to connect with her audience lies in her willingness to share her adversity battling panic attacks, anxiety, and depression. Narrating her journey with mental illness contributes to the authenticity of her poetry and resonates powerfully with viewers.

“I doubt that I would have an artistic life if I had not been pushed into it by my own flailing nervous system. Art is a shelter of sorts. At the same time, I have had shows where I was almost too panicked to speak. I had to keep saying to the audience, “I am feeling so much anxiety, I can barely get through this.” But I’m guessing in the long run even that is of some comfort to many people. To witness a panic attack on stage, and to watch art happen regardless.”

In addition to her work as a spoken word activist, Gibson created STAY HERE WITH ME in 2011, an online platform to share experiences of trauma, mental illness, of wanting to die, and of the different art forms that have prevented individuals from committing suicide. Gibson started this initiative with co-founder Kelsey Gibb, a mental-health professional and tour manager. Gibson’s work highlights the healing power of story-telling. As an art-focused space, STAY HERE WITH ME encourages the use of art and poetry to heal, connect, and remind the audience they are not alone. Hundreds of individuals have shared personal stories through her website, finding acceptance and understanding through shared experiences.

Through poetry and mental health advocacy, Gibson is determined to build a community dedicated to helping people who have suicidal feelings.

“I want to remind individuals struggling with suicide to be sweet to the part of them that is in pain. To hold that part with gentleness and not to ask that pained part to go away sooner than it needs to. Sometimes simply letting ourselves hurt is what the hurt needs to move through us.”

← Lessons from the Mental Hospital
A Father’s Grief →