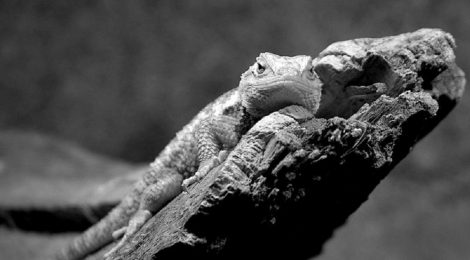 What Can a Lizard Tell Us About Human Mental Health?

A new study on lizards has found that, when exposed to stress, their responses can be passed down genetically. Scientists now believe there may be more to the process of heritability than once thought. This process is called “Transgenerational Stress Inheritance.”

As recently as 2011, most research did not examine the possibility that parental stress could affect sperm or egg cells. Since genes are transferred to offspring through these cells, anything that modifies them can have an impact on genetic expression in children. The idea that parents’ experiences prior to pregnancy can change gene expression and, therefore, affect offspring behaviour, is novel.

In the lizard study, researchers from Pennsylvania State University exposed young lizards to fire ants (a natural stressor) and compared stress levels to unexposed lizards. Interestingly, contact with the stressor did not affect the lizards’ behaviour later in life. But, their offspring had stronger stress reactions than offspring of lizards who had not been subjected to the ants.

“Our work reveals that the stress experienced by an individual’s parents or ancestors may overshadow the stress that an individual faces within its lifetime. In this study, offspring of lizards from high-stress sites were more responsive to stress as adults, regardless of exposure to stress during their own lifetime.”

These findings suggest that, although early life stress may not manifest later in adulthood, the effects may be passed down to offspring, even if offspring are not directly exposed to the stressor.

A similar study involved researchers conditioning mice to associate the smell of cherries with a mild electric current. When the fragrance permeated the air, the mice were given a small electric shock. And so, the mice began to fear the scent even when the shock wasn’t administered. Even more fascinating was that offspring of these mice, as well as their offspring, experienced fear in the presence of the odor. The fear reaction occurred even though the later generations didn’t experience the conditioning process.

Of course, the question these studies pose is whether there is a similar effect in humans. As recently reported in the Guardian newspaper, researchers from New York’s Mount Sinai School of Medicine compared the genes of direct descendants of Jews who were “interned in a Nazi concentration camp, witnessed or experienced torture or who had had to hide during the second world war” to the offspring of Jews living outside of Europe who were unharmed. The children of parents who experienced WWII trauma showed genetic changes and a greater risk of stress disorders. These were not present in the other children. The Guardian article stated:

“[The] new finding is [a] clear example in humans of the theory of epigenetic inheritance: the idea that environmental factors can affect the genes of your children.”

In other research, psychologist Margaret Keyes from the University of Minnesota and colleagues examined twins to determine if the behaviour of biological parents could affect offspring who were not raised by them. The study found that children of parents who smoked were more likely to be smokers, even if those children weren’t raised by the parents, and as such, did not have parental smoking behavior modeled to them. Scientists are still questioning, though, whether it’s parental behavior directly affecting these genes or a genetic predisposition to smoking being passed down for generations.

On the whole, these studies make the case that genetic changes can happen a lot faster than previously thought, within a few generations or even one generation. And, as reported in Science magazine, people can see evolution in real time:

“Now, thanks to the genomic revolution, researchers can actually track the population-level genetic shifts that mark evolution in action—and they’re doing this in humans. [Studies] show how our genomes have changed over centuries or decades…” Research in this field is still new and is subject to several caveats. Perhaps the most important one is the complexity of human beings and their environments. Indeed, there may be too many variables that factor into the human experience for researchers to arrive at definitive conclusions.

But, these studies do suggest that individuals may be affected by the stress felt by ancestors in  before them. Further research is required to determine whether these findings are the result of transgenerational stress inheritance or an external factor that has yet to be considered.

← Man Without Gravity
A Difficult Debate →