Do you want weekly updates about our content? Subscribe here:
Browse: Home   /   2022   /   February   /   Supporting Mental Health Through the Abortion Process 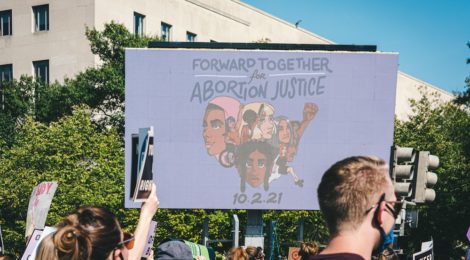 From Texas, to Mississippi, to Poland, we have seen a full frontal attack on reproductive freedom. The Trauma & Mental Health Report put this article together to focus on the experiences of those who choose abortion, experiences that are as rich as they are varied.

Stephanie Gómez, who is based in Texas working in democracy reform explains what she felt though her own abortion process:

“I had my abortion when I was in high school. I had just recently turned 18 so I didn’t have to abide by parental consent laws. I had a surgical abortion and was going to be put under general anesthesia, so I needed someone to drive me. The abusive person who got me pregnant was the only one who could, which put me in an unsafe situation and under a lot of emotional distress. I remember feeling relief after the abortion, but there was a lot of that internalised stigma. There was a period where I also felt guilty for feeling relieved.”

Antonia Biggs, a social psychologist at Advancing New Standards for Reproductive Health, explains that “the most common emotion associated with abortion is relief, as demonstrated by Corinne Rocca’s paper. Rocca found that people have more negative emotions about the pregnancy than the abortion and that the intensity of all feelings declines over time.” This may be surprising to some, as regret is commonly thought of as the prominent emotion felt post-abortion. Biggs shares some research on the feeling of regret:

“My colleague, Katrina Kimport, completed in-depth interviews with people who showed potential signs of regret about their abortions. In the end, she found that they were experiencing complex emotions about the abortion and their situation and that they weren’t actually regretting the abortion itself. Rather, they were regretting the experience of the unintended pregnancy, the reactions of the people in their lives to their pregnancy or abortion, their life circumstances, and so on.”

Biggs explains that The Turnaway Study provides us with the best evidence we have to date on the psychological consequences of having an abortion: “We find that the abortion itself doesn’t cause any kind of mental health harm, but that denying people their wanted abortions has more negative consequences to their mental health—more anxiety, stress, and lower self-esteem— than allowing people to get their wanted abortions. It’s also important to distinguish emotions about the pregnancy decision from a clinically significant mental health condition.”

Kelsea McLain, Health Care Access Director with the Yellowhammer Fund, describes the context that allowed one of her experiences with abortion to be emotionally easier:

“I’ve had three abortions and they’ve all kind of happened under very different circumstances in my life. My second was uncomplicated. It didn’t hurt me financially to pay for it, and I was able to have it happen at home and talked openly with my friends and loved ones about it. I think that really changed the experience for me.”

It’s important to recognize that any individual with the ability to get pregnant can experience a need for abortion. Trans, non-binary, and gender expansive individuals can face added challenges in accessing reproductive healthcare.

“My OBGYN’s attitude really shifted once I told them that I was possibly interested in abortion. I was denied care to the point where I felt like I was going to die. I think about why I called Planned Parenthood, and it was because of knowing what I knew, especially about the systemic racism issues that we have in the healthcare field. I was like, ‘I’m not about to die because no one wants to help me.’” When it comes to providing improved support for those who have had an abortion, there is a need for de-stigmatization. This applies particularly to the field of mental health, as some clinicians may hold prejudices toward their clients. Gómez shares:

“After my abortion, I went to my first mental health professional. The therapist would discredit the abusive situation and would say, ‘You’re feeling bad because you had an abortion.’ That really prevented me from getting the help that I needed for a long time. Now I can look back and say no, I was being abused and that’s why I was feeling depressed. I had the abortion and that was the relief.”

There are also options outside of traditional healthcare systems such as abortion doulas, who are individuals trained to provide emotional support throughout the abortion process. Sarah Lopez, Client Coordinator of Jane’s Due Process who got her start in the movement after her own abortion, shares why she’s training to be an abortion doula:

“I think it would have really helped to have somebody there to hold space, to talk me through everything and provide validation.”

Despite the barriers and stigma surrounding abortion, the pro-choice community is still actively working together to provide better resources for those who need this vital service.

Listen to our related podcast on the mental health experiences of abortion here.

← I Wanted It To Be Perfect
Sharp Objects →