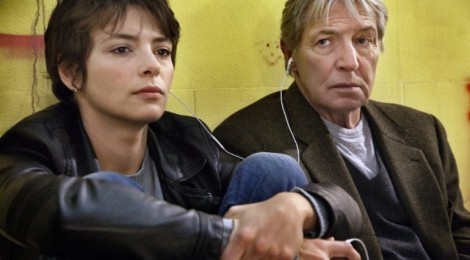 Early in the film, the audience is familiarized with Irene’s method; her clients take a lethal dose of barbiturates and they fall quickly to their death.  In the background, Irene plays their favourite music to calm them during their last moments of life.

The use of upbeat music during these moments of loss makes the viewer feel uncomfortable.  Since it occurs several times, it seems Golino is deliberately evoking these emotions in the audience so they can relate to Irene’s upcoming emotional upheaval.

Initially, Irene believes individuals who are terminally ill or physically incapable of enjoying life have the right to take their own life.  Her role in their suicide is merely a helpful service – almost humanitarian.  Since the concept of assisted suicide is taboo, it is difficult for the audience to agree with Irene’s belief. But things change when Irene meets a new client, Grimaldi, played by Carlo Cecchi. Unbeknownst to Irene, he is not terminally ill but simply sick of the world that he lives in and tired of the life he leads.  Since she is against helping the mentally ill commit suicide, Irene attempts to talk him out of killing himself.  After many emotional and rather witty encounters, Irene and Grimaldi seem to develop a farcical version of a father-daughter relationship.

It is during these moments that the audience appreciates Trinca’s performance the most.  She is able to portray the difficult emotional development of Irene with ease.  Early in the film, her character seemed lacklustre and monotonous.  But as the film progresses, Trinca is able to capture the emotional unraveling of an individual who is no longer able to maintain her calm persona during moments of death.

Perhaps the most prominent theme of Golino’s film is ambiguity.  The audience is not privy to much of Grimaldi’s back-story, which could have shed some light on his wish to end his life.  There is an allusion to depression, but there is no suggestion in Cecchi’s performance of any specific symptoms of depression or other mental disorders.  The character seems bored throughout the film; seemingly victim to a sense of ennui the audience never understands the origin of.

We are also briefly presented with Irene’s clients, but not given the opportunity to learn more about them and their families.  Golino could have further explained what ailments were causing them to use Irene’s service and express the emotional toll that these services have on the client’s family.  Instead, the clients and their families exist only in the moments of death, with the aftermath never discussed.  Their stories before and after they meet Irene are left to the imagination. Despite these shortcomings, the film’s major strength is its thought-provoking topic and the questions it raises in the mind of the viewer.

Individuals suffering from mental health ailments, like depression, experience long-term emotional pain and debilitation alongside other unbearable symptoms.  Treatments – natural or medicinal – may not alleviate these symptoms, and individuals may live with them for the rest of their lives.  Would this notion, along with assurance that the individual is in the right state of mind to consent, be enough to allow the use of assisted suicide?

In a recent interview with Golino, she states that her film purposely takes no definitive position in this debate; however, she does believe that “human beings should be able to decide what to do with their own life, their own body and their own end.”

With no simple answer, Miele shines a light on a taboo subject and brings the complexities of life and death to the forefront.

← One Hundred Names for Love
Superhero →