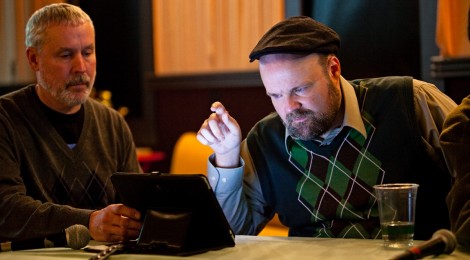 “Not being able to speak is not the same as not having anything to say,” read the flat and emotionless voice of the computer. The author of these words, Tracy Thresher, is a 42-year-old man living with autism.

“Tracy, good job! I am landing on my bald head some good vibes from you,” added Larry Bissonnette, a 52-year-old autistic man and long-time friend of Tracy.

Since 2000, Tracy and Larry have been traveling the globe on a quest to redefine autism, offering an insider’s perspective on the disorder. Part of their fame comes from being among the first with autism to communicate through typing, at first relying on others to help them control their muscle spasms, but now writing independently.

Their goal is to change public and professional views on the disorder, including preconceptions about disability and intelligence.

During their travels, they stopped at York University in Toronto, Canada, where they presented a screening of their documentary Wretches and Jabberers, followed by a panel discussion. As audience members arrived, Tracy and Larry were already conversing with the event organizers by typing on their iPads.

At first, Tracy comes off as clumsy and quiet, while Larry seems lost in echolalia, the uncontrollable repetition of words commonly associated with autism, their outer appearance revealing none of the thoughtfulness and humour later conveyed in written form. Larry views the main goal of his self-advocacy to make “intelligence seen as possible, no matter how weird you act or how little your speech is. Autism is not so much an abnormal brain, but abnormal experience. My difficulties are not with thinking and knowing, but with doing and acting.”

They have no oral language skills and engage in odd, uncontrollable rituals. Growing up, both were labelled ‘low-functioning autistics,’ presumed to be mentally retarded. They were excluded from normal schooling and faced the challenges of social isolation in mental institutions and adult disability centers.

Today, we know that including students with special needs in regular classrooms can greatly improve development and quality of life. Yet according to the Canadian Council on Learning, a large number of students with the disorder continue to be excluded from mainstream classrooms.

According to the Autism Society, 500,000 Americans with autism will reach adulthood in the next 10 years, but Tracy and Larry wonder whether we will find a way to embrace these individuals or if we will continue to marginalize them. Larry suggested that, “the problem isn’t autism, the problem is the lack of understanding of autism, lack of resources, interventions not being met with the person in mind, and assumptions being made about the person.”

Performance is often a reflection of the individual in context. Through their advocacy, Tracy and Larry say that sufferers of autism are more disabled by the environments they live in than their own bodies.

Tracy’s accomplishments are a testament to the potential that some with autism possess. He has presented at numerous local and national workshops and conferences, and has consulted to schools. He is also a member of the Vermont Statewide Standing Committee, and has worked for the Green Mountain Self-Advocates.

An artist, some of Larry’s notable achievements include his paintings, which are in the permanent collection at the Musée de l’Art Brut in Switzerland and in many private collections around the world. His work was most recently featured in the Hobart William and Smith Disability and the Arts Festival.

The goal behind their efforts is to encourage people to re-examine misconceptions about autistic people, and to allow educators, professionals, and the public to discover the individuals behind the label. This view aims not to romanticize the struggles of autism, but to promote the idea that if autistic individuals cannot learn within the current educational system, schools need to adapt.

Allowing these individuals to develop their own unique talents will help them thrive.