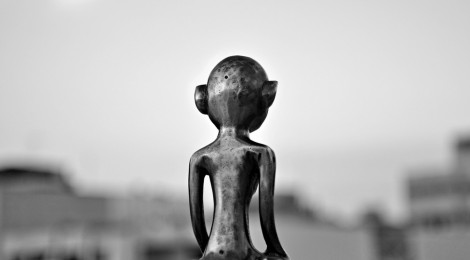 How I Came to Embrace My Mental Illness

Rachel McKibbens writes a personal essay on her experience with bipolar disorder and that by denying that she had a problem, her mental condition worsened but through the art of poetry, she was finally feeling like herself again.

How I came to Embrace my Mental Illness
By Rachel McKibbens

I used to visualize my brain as this cold, enemy planet that the rest of my body orbited and, sometimes, crashed into. I imagined my brain as separate from myself, in a dark corner of my skull, plotting. Devising its next wicked plan to dismantle my life. It was easy for me to detach myself from the reality of bipolar disorder because it is a mental illness, so only my head had the problem. It was close to invisible. The rare times I did speak of my depression, it was cushioned with self-deprecating humor, presented as more hyperbolic than authentic. With language I planted distractions, thwarting every opportunity for the planet to be named.

When I’d retreat, ignoring phone calls and emails, vanishing for weeks at a time, I was allotted this radio silence without much concern; poets, after all, are notorious for falling into A Mood. My friends didn’t know I contemplated committing suicide at least twice a week, would go up to six days without sleeping, obsessing over the idea that I might one day become my mother: a paranoid woman who heard voices, receiving direct orders from God through the radio. A lost astronaut, spinning further and further away.

In 2010, a year after moving to upstate New York, hundreds of miles from my friends, I spiraled into the most severe depression of my life. There was no longer an audience, no need to fake it. Sadly, my children had grown accustomed to my bad days. They knew when to avoid me and when to give me a hug or rub my head. They were the last of what was anchoring me to this world, and it pained me to know they knew it.

I fought hard to be present for my children, but often I’d find myself in the middle of a conversation, then see my daughter shaking her head, asking, “Are you even listening to me, mom?” Other times I’d be standing in a part of the house without any idea why I was there, or how I got there. Too many times I had to ask myself, “Why am I here?” There were tasks I completed, things I smashed, poems I wrote, rants I hurled, that I was not present for. This terrified me. I had five children, a beautiful home and I was checking out.

The dissociative behavior grabbed hold of me hardest at night. Once the kids were put to bed, I drifted. My eyes blackened and I would fall catatonic. If I stayed too long in this state, the edges of my body would start to tingle and I’d feel myself, the energy that was my actual self, begin to thin, absorbed by the static. Eventually, this started seeping into my days. The unpacked traumas and lack of sleep, the growing shame and denial took a heavy toll on not only my brain but my entire body. My joints ached at the slightest touch. My body swelled around each inflamed muscle. My temper became unyielding.

Then my language began to deteriorate. I lost the name for things. Basic things. I was a poet and I lost the name for things. Frustrated and panicked, I chose words woven with cruelty. There were moments when I heard myself speaking and knew it was not me. I often pleaded, while outside of my body, to my body, “Ooooh no no no no, please, do not say that.” But I couldn’t stop myself.

Poetry had been my outlet for over a decade. Normally, when I was struggling with something, I wrote myself through it. In poems, I admitted my ugly. Resurrected departed friends and relatives, constructed beauty from the demolished, gave every trauma I’d outlived its deserved name. I realize now, I never wrote about living with mental illness because I wasn’t living with mental illness. I was running from and fighting with and stumbling through and barely surviving the shame of it.