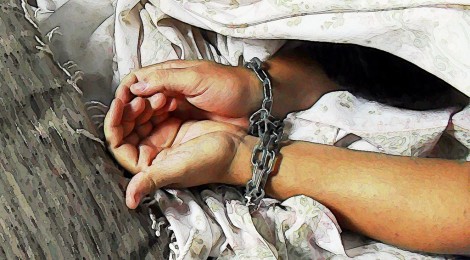 In Nepal, the incidence of human trafficking has grown in the past decade. Each year, over 7,000 women and girls are trafficked out to India, the Middle East, and Malaysia, while many others are trafficked within the country, forced into prostitution or domestic servitude.

The story of a young woman, Maya, reveals the impact. Twenty-five years old, she is dying from AIDS:

“My parents sold me and went away. They said we’ll come back. I kept waiting. The brothel owner told me I would have to work. I cried so much. They said will your parents repay us? God, how much they beat us.”

Of those working in prostitution in India, 26% are from Nepal, forced into the sex industry before the age of ten, when they can fetch a higher price. Research shows that being trafficked at an earlier age increases posttraumatic stress disorder (PTSD), dissociation, intrusive negative thoughts, self-harming behavior, and suicide.

Despite consequences, human trafficking is an enormous industry, making over US$32 billion worldwide every year, but some organizations have been formed to help victims. Shamrakshak Samuha Nepal or SASANE, which translates in Nepali to “Let’s protect ourselves,” was established in 2008 to help female survivors of trafficking and those at risk of being re-trafficked in the future. The program focuses on education and professional skills development, training women who have escaped trafficking to become paralegals.

In a recent interview, Shyam Pokharel, director of SASANE, explained how many of the girls and women he works with come from rural areas and have little or no education or work experience. Unable to afford school, they are desperate, powerless, and vulnerable; sold by family members, neighbors, or friends, lured by the promise of employment, marriage, reconnecting with distant relatives, or receiving medical treatment.

To date, 170 women have emerged from the program as certified paralegals. The key to the program’s success, according to Pokharel, is that the women can connect with fellow survivors and form bonds in an educational setting. Working within the legal field also helps them understand how the law views human trafficking and reduces self-blame, which is otherwise common among victims.

The program is also unique in that it begins with theoretical training, but quickly moves on to practical courses, allowing the women to provide legal assistance and preliminary counseling to other victims seeking entry to the program.

The courses last up to 6 months, with the women working and training alongside other paralegals in police stations throughout Kathmandu and neighbouring valleys. This culminates in a paralegal certification exam, which graduates of the program usually do well on. A notable obstacle facing many of the program’s graduates is that the certification requires a high-school diploma, which many lack. SASANE often works to provide the women not only with a paralegal education, but with a high-school equivalent as well. Many graduates have also returned to their villages, creating their own initiatives and promoting education. SASANE helps them become advocates for themselves and others. In the words of a survivor:

“The men just leave us here and then disappear. We don’t even know where we are. Once forced into prostitution, we think we will send home a little money. Our families are so poor. Let not our little sisters suffer our fate.”

A 2013 study by Kristine Hickle and Dominique Roe-Sepowitz at Arizona State University shows that an important element in recovery for human trafficking victims is helping them acknowledge they were exploited. The authors analyzed a 12-week psychoeducational curriculum geared towards helping victims of trafficking cope with the aftermath of trauma, revealing that group work and education are key.

Echoing these findings, Pokharel considers the mindset of women in his program changing simply by finding out that others who have had a similar experience are working towards shared goals.