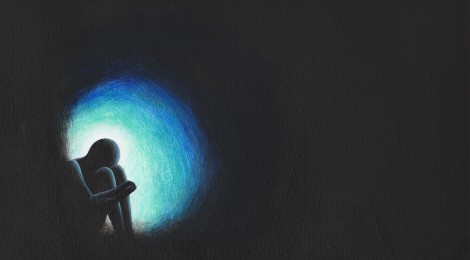 In 2008, Canadian journalist Amanda Lindhout was kidnapped while documenting the civil war in Somalia. After 460 days of repeated beatings, rapes, and other abuses in confinement in Mogadishu, she was finally released.

Lindhout described her ordeal in an interview with psychotherapist Katherine Porterfield for the European Journal of Psychotraumatology:

“Chains were put around my ankles and I was locked up in a dark room, forbidden to sit up or lay on my back. There was a great deal of violence, including sexual assaults and beatings.”

Although Lindhout had no control over her kidnappers’ behaviour, she quickly realized that she did have control over her own. She used this philosophy as the foundation for survival, turning to mindfulness practices, such as meditation and deep breathing, to endure the torture:

“When my abuser would leave the room I would choose a mantra to say over and over, with controlled breathing, to calm down. My mantras were often ‘I choose freedom,’ ‘I choose peace,’ and ‘I choose forgiveness.’” Mindfulness techniques as a means of coping with trauma feature prominently in the growing field of positive psychology. In an article for the Journal of Cognitive Psychotherapy, Leslie Karwoski and colleagues explain that mindfulness tools can help individuals reach a state of relaxation and manage destructive thought patterns.

During her captivity, Lindhout also used memories of positive experiences to sustain her. Research by Barbara Fredrickson at the University of North Carolina demonstrates that positive emotions felt in the present can create a reserve that may be utilized to face difficult situations at a later date. That is, some emotions can heal the damage caused by others. Lindhout explains further:

She also recognized that her captors had been victims of war-torn Somalia; they had seen cruelty and violence inflicted on themselves and their families. This knowledge led her to choose compassion and forgiveness over anger and hatred, in spite of her own suffering.

“When I realized that my captor was driven to create suffering for me because of his own state of suffering, most unexpectedly, I felt compassion. The more I gravitated to compassion, the stronger my conviction to forgive became a gift to my own self, to save myself from the agony of hate.” Paul Gilbert, who created Compassion Focused Therapy, describes compassion as the ability to feel the suffering of others and to actively apply these feelings, as Lindhout did. In fact, acts of compassion are being studied as a means to improve well-being and overcome adversity. A study by York University clinical psychology professor Myriam Mongrain shows that these acts may increase happiness and self-esteem.

In therapy, Lindhout continued to heal. Porterfield explains that Lindhout’s resolve to choose compassion and forgiveness gave her strength to endure her long bout in captivity and facilitated her recovery. Lindhout states:

“I absolutely believe in the messages of forgiveness, gratitude, and choice.”

This approach, however, is personal to Lindhout, and may not be applicable to many. Her ability to choose compassion for her captors, over anger and hatred, is really rather unique. And not everyone can find positive memories to pull from as she did during her ordeal.

Still, author of Post-Traumatic Success Fredrike Bannink suggests that people who can search for even one positive outcome can build on that strength when moving forward from trauma. In her clinical practice, Bannink finds that these techniques help clients move forward. She asks them to look beyond the trauma and envision what they wish for their future–and consider what steps they can take to reach that vision.

In her search to heal, Lindhout’s vision was to give back. Since her recovery, she is thriving as an advocate for human rights, having started a charitable foundation to address the violence and poverty that is pervasive in Somalia. Giving back to the country that was the setting for her ordeal has helped Lindhout find meaning and purpose in the traumatic events she endured.