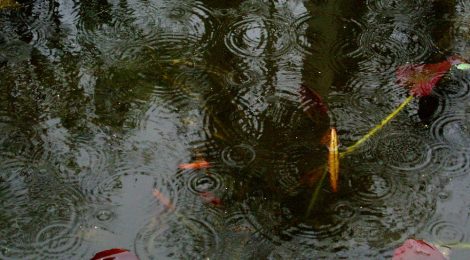 The third stanza of Mary Oliver’s poem Rain, outlines the moment the author’s family discovers her uncle’s suicide one rainy day. The verse is all the more powerful in its proper context: the rest of the poem is about the beauty of the natural world and the life-giving power of rain. Within the stanza itself, the lines reveal a world in which it is possible for both the exquisite and the terrible to coexist, the terrible all the more striking for taking place amidst the beautiful. In spare words that nonetheless speak volumes, Oliver sketches her family’s helplessness and despair in the face of unspeakable loss.

Or this one: on a rainy day, my uncle

lying in the flower bed,

dragged from the idling car

with its plug of rags, and its gleaming

length of hose. My father

then the ambulance came,

then we all looked at death,

then the ambulance took him away.

From the porch of the house

I turned back once again

looking for my father, who had lingered,

who was still standing in the flowers,

who was that motionless muddy man,

who was that tiny figure in the rain.