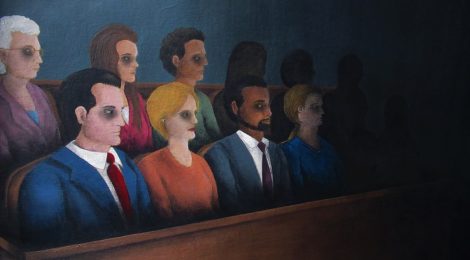 Jurors Are Left Traumatized by Some Court Cases

On November 7, 2016, the Ministry of the Attorney General of Ontario reached a settlement with a juror diagnosed with vicarious post-traumatic stress disorder. The juror served on the trial of eight-year-old Tori Stafford’s killer.

The woman, who cannot be named due to a publication ban protecting the identity of jurors in this case, received the diagnosis months after performing her civic duty. Four years ago, she was one of 12 jurors in the trial of Michael Rafferty, the man charged and convicted of kidnapping, sexually assaulting, and murdering Stafford.

While sitting on the jury during the two-month trial, the woman visited scenes of rape, saw photographic evidence of the crime, and heard eyewitness testimony from Rafferty’s girlfriend and accomplice, Terri-Lynne McClintic.

In a submission to the Ontario Court of Appeal, the juror said that, almost immediately after the trial, she lashed out at her children, suffered from depression, had flashbacks to disturbing pieces of evidence, and experienced short-term memory loss and difficulties with concentration.

Over the course of a criminal trial, jurors are often exposed to disturbing graphic evidence. And while jury members are instructed to remain unbiased and evenhanded, the process can take a toll on their mental health. Beyond the traumatizing effects of graphic evidence, the weight of the task itself can be harmful to jurors’ wellbeing. The high-stakes decision that members have been tasked with, which includes determining the fate of someone’s life, can be psychologically taxing. This pattern of stress and anxiety is frequently observed in other high-pressure jobs that involve exposure to traumatic information and heavy responsibilities, such as social work.

Patrick Baillie, a psychologist with Alberta Health Services, and former Chair of the Mental Health Commission of Canada, says that jury members are often not mentally prepared to sit through a criminal trial:

“These are twelve citizens who don’t typically have any involvement with the system, which is why we want them to serve as jurors, being given this extraordinary task with not a whole lot of mental support.”

In addition to the responsibility of remaining impartial, jurors are not allowed to share any details related to their deliberations. To protect the integrity of the trial, members are prohibited from discussing their personal views on the evidence, witnesses, or trial process, to ensure confidential information cannot be related back to discussions that took place in the jury room. Baillie explains:

“It is illegal to disclose the deliberation of a jury to anybody. So, [you] can’t tell a spouse and family and friends… people in [your] usual support system and the mental health professionals that [you] may want to come in contact with down the road. We need to make sure that jurors are not identified and to make sure the process is pure as it can be.”

Under these circumstances, jury members are left to process the psychological and emotional effects of the trial on their own.

“We ask jurors to sit through days, weeks, and sometimes months of testimony and sometimes that testimony is very, very difficult, and we ask them to keep it to themselves, not discuss it with people outside.” Until recently, Ontario judges were responsible for deciding whether jurors should be offered counseling at the end of a trial. Jurors would then either be connected with counselors provided by the Ministry of the Attorney General or would pursue counseling on their own.

Starting in January 2017, however, Ontario initiates a new program to provide free and accessible counseling services to anyone serving on a jury. The Ontario Attorney General Yasir Naqvi says the Juror Support Program will be available for anyone serving in a criminal or civil trial, or an inquest.

Jurors will be provided with information on the program at the beginning of a trial, and then again as it finishes. They will call a designated phone number, speak to a specialist who does an assessment, and have counseling made available to them. A third party will provide and cover the costs of the counseling services, but the government still determines who that third party will be. Naqui says:

“Jurors in difficult trials do face evidence that could be quite horrific, and we’ve heard those stories. It’s only appropriate that we provide appropriate services.”

← The Noonday Demon
Assisted Dying:  We Need a Larger Conversation →