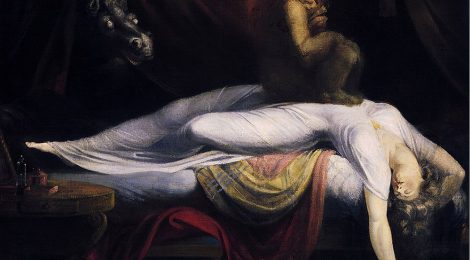 Sleep Paralysis: Not the Stuff Sweet Dreams are Made of

As a child, I would sometimes find myself wide-awake in bed, but unable to move. Some nights, I would hear voices in my room, as I felt invisible forces pinning me down. When I would finally regain control of my body, I was left feeling terrified.

Sleep Paralysis affects roughly 8% of the general population, yet its cause remains speculative, full of competing scientific, cultural and religious explanations.

Our current understanding is that sleep paralysis happens during rapid eye movement (REM) sleep, which is a sleep-cycle in which a person’s eyes and brainwaves move at an accelerated rate, similar to a wakeful state. In this paralyzed limbo between sleep and wakefulness, people may experience multi-sensory dream activity, including auditory and visual hallucinations, that are generally described as terrifying. Scientifically, these interpretations of sleep paralysis are plausible, but one component remains especially elusive. Many report a common visual archetype—a dark figure sitting on their chests.

In Medieval Western philosophy, an “Incubus” was a seductive male demon who rested on the chests of sleeping females. In late Latin, “Incubo,” roughly translates to, “nightmare, one who lies down on (the sleeper).” Similarly, some Inuit communities recognize sleep paralysis as “Uqumangirniq,” a term that in Shamanistic practices refers to an individual who is sleeping or dreaming and whose soul is vulnerable as a result of being consciously unguarded. In Brazilian folklore, the “Pisadeira” is a crone with long fingernails who rests on the bodies of those who fall asleep. Sleep paralysis in Nigerian culture is referred to as “Ogun Oru”, or nocturnal warfare, during which sufferers are visited by a female entity. This malevolent being is present in numerous other cultures as well, including in Ethiopia as “Dukak,” in Egypt as “Jinn,” in Thailand as “Phi am,” and in Newfoundland, Canada as “Old hag.” In an interview with the Trauma and Mental Health Report, Alison (name changed), explained that she experienced sleep paralysis during childhood, then again in early adolescence, and only a few times in her early twenties. Likewise, Asher (name changed), commented that he experienced sleep paralysis in his childhood and again recently, explaining:

“Over the last few years I have noticed it in particular, and even had some more aggressive and frightening situations occur during this time.”

If sleep paralysis can be understood as being a universal by-product of REM sleep, why do many experience this natural occurrence at random moments in their lives as opposed to every time they sleep? When asked to elaborate on the frequency of sleep paralysis, Alison commented:

“As a child, I remember it happening often. Within that time frame my grandfather was ill, and then passed away. As teen and adult, I can remember about 5 times, during this time there was family illness again- so my best guess was stress was the cause.”

Scientific studies have reported a correlation between sleep paralysis and posttraumatic stress disorder, explaining why for some, these incidents manifest during stressful periods of life. However, this does not explain why many who have endured stressful events do not suffer from sleep paralysis at all. And how do we understand the shadowy figure that appears to some? Alison explains:

“Most of my experiences involved seeing a shadow at the end of my bed. The scariest was when it felt like someone was pushing me down – standing or floating above my body.”

Similarly, Asher described what he remembers:

“Something viewing my own motionless body, and oddly enough I have felt my breathing feel as though it was slowing down.”

In Alison’s case, the shadow was visualized as being either at the end of her bed or floating above her paralyzed body. The reason that some feel a demon resting on their chest is explained as the psychological interpretation of the chest pressure experienced during motor paralysis.

The feeling is experienced as very frightening, even traumatic, as described by Keira (name changed). Keira says she continuously endures sleep paralysis roughly four nights a week, with her earliest recollection from when she was about eight-years-old. She explains:

“I’ve seen hands reaching at me from the ceiling. . . demons on my chest, figures around my bedroom and I’ve felt insects crawling under my skin.”

← The Face We Hide
Scatman John →