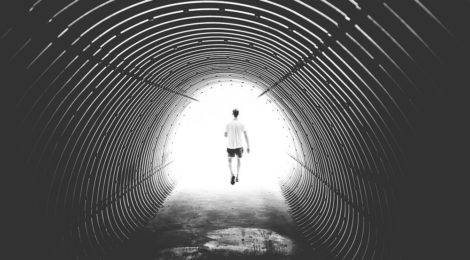 When Doing Counselling with Survivors of Trauma and Near-Death Experiences

Physician Maxwell Cooper presents the case of a young man struggling with PTSD after years of torture. During one torture session the man recalled the feeling of:

“Rising toward the ceiling of the torture chamber and looking down to observe his body being beaten below. There was a “pure white” light and a sound like “an open ocean”. He felt as though he had “left suffering behind”. At one point he heard familiar, “gentle voices”. Images flashed before his eyes, for example of himself as a baby…The bright light then formed a tunnel and he saw his body starting to fade away.”

The sensation of leaving one’s body and being transported away from a life-threatening situation to a place of peace, seeing or hearing helpful beings, or images of one’s life flash by encompass several features of what we call near-death experiences (NDEs).

Research suggests that the incidence rate for NDEs among those who have survived a close brush with death is around 20%. Given that NDEs and PTSD commonly originate in exposure to life-threatening events, it seems reasonable to speculate that many who have been diagnosed with PTSD may also have experienced one or more features of an NDE.

Unfortunately, I can find no research on incidence rates of NDEs among those diagnosed with PTSD or about how exploring NDEs in the context of trauma counseling might be helpful.

Most NDEs include content that is life-affirming and comforting. Aftereffects can include diminished fear of death, increased compassion and spirituality. In some cases though, NDEs contain negative content.

Estimates vary but as many as 15% of those reporting NDEs describe them as distressing, even “hellish.” This includes being in a lifeless place, feeling threatened or sensing danger. It’s easy to imagine that such content could be a contributing cause of PTSD and/or exacerbate its symptoms.

Conceivably, this kind of experience could become the source of triggers, avoidance behaviors or intrusive memories. It could also reinforce self-limiting beliefs such as “There’s something wrong with me” or “I’m not safe.”

One of the few studies to consider the convergence of posttraumatic stress and NDEs, found that among subjects reporting a close brush with death those who also had an NDE reported more intrusive symptoms of PTSD than those who had not.

Even when the content is pleasurable, NDEs can cause distress. Some can be so disorienting and at odds with conventional experiences they can lead to “long-term depression, broken relationships, disrupted career” and “feelings of severe alienation.”

Both NDEs and PTSD can shatter assumptions about the world. Both can raise questions about one’s identity and lead to personality changes which may strain relationships and undermine social support.

As with trauma survivors who avoid talking about traumatic events, those who have had NDEs may be reluctant to share the experience due to fear of rejection, ridicule, or of having something important dismissed. Others may worry that they will be stigmatized or diagnosed with a mental illness.

Thus, there may be shared challenges that impede the processing of a traumatic event and an NDE. Such challenges may even become mutually reinforcing. For example, someone trying to avoid trauma reminders may also avoid thinking about a psychologically disorienting NDE. Can NDEs Promote Healing in Clients with PTSD?

Despite reports of negative content and the potential challenges associated with assimilating NDEs, a majority are perceived as positive. An NDE often “permanently and dramatically alters the person’s attitudes, beliefs, and values, often leading to beneficial personal transformations. Aftereffects most often reported include increases in spirituality, concern for others, and appreciation of life; a heightened sense of purpose; and decreases in fear of death, in materialistic attitudes, and in competitiveness.”

It’s easy to imagine how such experiential qualities might be leveraged to foster healing from trauma. Yet, I’ve found that even when the content of NDEs are positive, clients with PTSD often dismiss them or impose negative interpretations. I worked with a woman who as a child had been repeatedly raped by her father. Decades later, showing clinical indications of PTSD, she told me about an NDE she’d had during one of her father’s attacks in which she left her body and met her deceased grandmother who offered comfort and love.

Her father had threatened that if she told anyone about his assaults people would think she was crazy. Thus, rather than integrating the experience of her grandmother’s love as a source of comfort and self-worth, the event caused her to believe she really was crazy. Not surprisingly, she never told anyone about this until she disclosed it during our session.

This kind of negative interpretation bias is understandable in someone with PTSD for whom the world may seem threatening and unsafe. Additionally, if the NDE was coincident with a traumatizing event this association may make it difficult to recognize or trust positive NDE features.

Greyson suggests that positive features of NDEs “might help defend against the development of full-blown PTSD.” Cooper suggests that mental health professionals working with survivors of psychological trauma should assess for NDEs and, where appropriate, use them to foster psychological healing and growth.

The American Psychological Association’s Posttraumatic Growth Inventory (PTGI) assesses trauma survivors for psychological growth by gauging agreement with various statements. These include: “I changed my priorities about what is important in life; I have a better understanding of spiritual matters; I have more compassion for others.”

Consider how similar these measures of posttraumatic growth are to common aftereffects of NDEs such as: a new sense of purpose or life mission; increased compassion and love for others; deepened religious faith or spirituality; and an intensified desire to serve others.

Using the PTGI with subjects who had experienced a life-threatening event, Khanna and Greyson compared those who reported NDEs with those who did not. They found that “NDEs are associated with increased posttraumatic growth and that the ‘deeper’ the NDE, the more profound is the posttraumatic growth reported.

Although participants were not assessed for PTSD, the results reinforce what I have found in clinical practice. Clients with PTSD who have also had an NDE that is disclosed during counseling often use the NDE as a source of meaning, enhanced self-worth, and posttraumatic growth. Such explorations can also normalize an NDE and diminish distress with which it may have been associated.

I worked with a patient who developed delayed-onset PTSD related to combat. As he struggled with adverse aspects of illness such as debility and physical pain, he began having nightmares, panic attacks, and moral pain related to “dropping bombs on women and children.” He disclosed a combat-related NDE during which he’d felt unconditional love, unitive consciousness and had received the message that “everything bad I’d ever done had already been forgiven.”

He had dismissed this experience as an indication of “combat stress” and never spoken about it. When the NDE’s content was brought into our sessions he was able to affirm the experiences of love, connection and forgiveness which lessened the intensity of PTSD-related anxiety and shame. His panic attacks and nightmare ceased, and he was able to express his moral pain in ways that allowed self-compassion for himself as a “twenty-one-year-old kid” thrown into the savagery of war. Need for Training and Research

Although there is value to bringing NDEs into counseling sessions, doing so is not the norm. Most mental health professionals receive little or no training in how to screen for these kinds of experiences and are unfamiliar with their prevalence, characteristics, or potential impacts.

Some dismiss NDEs as mere physiological, psychiatric or medication effects. Others worry that taking them seriously could reinforce delusional thinking or escapist fantasies. Most are simply unaware of how frequently NDEs occur when someone has survived a life-threatening event, and how real and profound they are often perceived to be.

A study of combat veterans found that 82% of subjects had not disclosed NDEs to Veterans Administration staff. The researchers concluded that mental health providers need training in “how to invite survivors of a close brush with death to disclose a possible NDE. It may also need to include the point that NDEs alone do not justify diagnosis of mental disorder nor, it follows, treatment with psychoactive medications.”

We currently have little idea whether NDEs might increase or decrease a trauma survivor’s susceptibility to PTSD, or to what extent this susceptibility might be influenced by NDE content. We also have no clarity about how processing NDEs in the context of PTSD counseling might assist in trauma recovery.

Though we need research into this area, there is potentially great value in assessing for and processing NDEs in a therapeutic context. These experiences can be important sources of insight and healing for people with PTSD. They should be taken seriously by mental health providers and should be a standard feature in clinical training.

Scott Janssen, MA, MSW, LCSW is a clinical social worker with University of North Carolina Hospice.  He is a member of the National Hospice and Palliative Care Organization’s Trauma Informed Care Work Group and has published many articles on trauma informed care of terminally ill patients and on end-of-life transpersonal experiences like NDEs. His book Standing at Lemhi Pass: Archetypal Stories for the End of Life and Other Challenging Times explores the use of therapeutic storytelling with hospice patients.

← No Sleep
Mentally Yours →