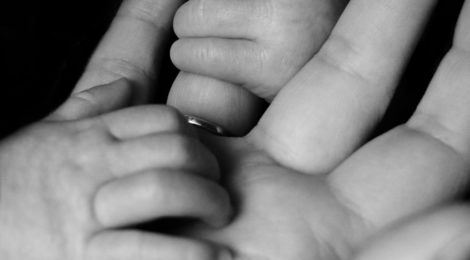 Portrait of a Mother and Child

Jennifer Bae is an artist from Guelph, Ontario. In her adolescence and young adulthood, the artist sought solace in macabre art that revolved around themes of isolation, violence, and abuse. She felt compelled to express her own darker emotional experiences in the visual art medium.

The artist’s untitled acrylic painting of a mother and child is an expression of her own experienced trauma, in which symbolic imagery and compositional elements inspired by existentialist painter Francis Bacon are used to tell a story of neglect and childhood trauma.

Voids are focal points throughout the space. Bacon’s signature ‘screaming mouth’ is depicted in the mother as she emits an unfettered rage, reflected back in the agonized gaping mouth of the child. The mother’s eyes are faint, sunk too deep to see the child and the pain she has inflicted. The void of the floor below the child represents an anger that leaves the child groundless and threatens to engulf the child entirely.

Features of the child are not visible to the viewer or are missing altogether as the child loses its sense of humanness. However, in contrast with the mother, the child’s skin still bears a human complexion and the warmth of innocence.

It is an early and deeply personal piece the artist cherishes. Reflecting on it in her own words:

“I remember working on it and being very absorbed in it, and feeling myself process all my hurt as I painted. But also, it was hopeful. It confirmed, ‘I don’t feel well’, and I think that was powerful. I confirmed to myself, ‘I’m mobilizing my hurt, making this visual representation, and what I’m going through is valid.’” ← E3: Compassion and Altruism
Coping When Your Child is Diagnosed with a Mental Illness →